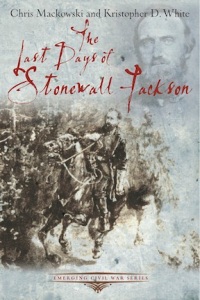 It is considered by many to be the moment in the American Civil War that changed everything. On the evening of May 2nd, 1863, Confederate Lieutenant General Thomas Jonathan Jackson, the “Mighty Stonewall,” was wounded by friendly fire while doing reconnaissance following the greatest success of his career: the Flank Assault at Chancellorsville. The wounded Jackson was taken to a field hospital, where his left arm was amputated. Removed to safety at Guinea Station, his wounds appeared to be healing. But alas, pneumonia set in, and the General died eight days after he was shot. The events that transpired in the days before, and the years after, “Stonewall” Jackson’s death, are covered in the latest edition of the Emerging Civil War Series. Written by historians Chris Mackowski and Kristopher D. White, The Last Days of Stonewall Jackson: The Mortal Wounding of the South’s Greatest Icon, tells the story of this pivotal event in American history.

Mackowski and White have done thorough research into this story, presenting the wounding of Jackson, the dangerous journey to get him to a field hospital, the surgery, the removal to Guinea Station, and his subsequent death, in nearly-minute detail. But what sets this account apart from other tellings of the story is the fact that Mackowski and White are terrific writers. The work actually connects the reader personally to Jackson, making his wounding and subsequent death from pneumonia very emotional. This gives their work an emotional power that is rare for books on Civil War and American History.

But the book does not stop with the death and funeral of the Confederacy’s greatest icon. The Last Days of Stonewall Jackson also covers the curious story of Jackson’s amputated arm, as well as the decline and restoration of the exterior office building of the Chandler House at Guinea Station, where Jackson spent his final days. The efforts to preserve the building now known as the Stonewall Jackson Shrine is told in great detail, and the great writing keeps this part of the story from becoming dull and tedious.

In addition to the powerful main text, the authors have included several pages of appendices that readers will find incredible. From Jackson’s pre-war life in Lexington, Virginia, to memorializing the “Mighty Stonewall” in art, to exploding the greatest “What if…” of the war, the appendices offer readers even more information on Jackson and his life. But perhaps most fascinating and entertaining of all is the section “Stonewall Jackson in Memory,” which delves into the legend of the “lemon myth” that has stayed around Jackson ever since his death. The book also includes suggestions for further reading on the life of Thomas “Stonewall” Jackson.

As a student of Civil War history, I find The Last Days of Stonewall Jackson to be an invaluable addition to any Civil War library. The authors have written a fascinating and emotional account of the death of the man who was, to many in the South and the North, the greatest General the Confederacy had. The book includes additional information on Jackson, as well as some fantastic period and modern images related to Jackson and his life. If you are a student of this period of American history, or someone wishing to learn more about this tragic period, then this book is definitely a must-read. This book comes highly recommended!