Film Rating: PG-13 for War Violence and Some Thematic Elements 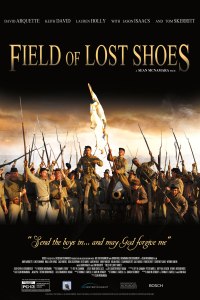 In the heart of the Shenandoah Valley lies a little town called New Market. It is a peaceful, quiet little village. But on May 15th, 1864, the peaceful hills would be witness to the horrors of war, as Confederate and Union forces clashed. The battle has never had the fame of Gettysburg, Antietam, or Shiloh. But for the men who fought this horrific battle, the impact would be no less horrific. Perhaps no more so than for the 274 Cadets from the Virginia Military Institute in Lexington, Virginia, who marched 80 miles to serve as relief troops for General John C. Breckenridge’s Confederates, only to be ordered to take position in the center of their lines. For the only time in American History, an entire student body would come under enemy fire, and prove their mettle in a dramatic charge that turned the tide of battle. The story of those cadets from VMI, and the impact it had on the battle, is the subject of the film Field of Lost Shoes.

Directed by Sean McNamara (Soul Surfer), and featuring a mixed cast of fresh faces and well-knowns, Field of Lost Shoes won the Best Dramatic Feature Award at the GI Film Festival. Sadly, the film came in under the radar, when it received mixed reviews, and an all too brief theatrical release in September of 2014, following a release on DVD and Video on Demand earlier this month. However, after viewing the film, I cannot help but feel that this movie deserved a better release strategy. For this is, in my humble opinion, the finest film yet made on the events of the American Civil War. From the very beginning of the film, to its closing moments, the movie serves as a moving tribute to the Virginia Military Institute, and the cadets who served at the Battle of New Market.

While the film does cover some of the strategic, political and social aspects of the war, the film keeps most of its focus, and rightfully so, on seven members of the Corps of Cadets from the Virginia Military Institute; seven young boys and men who would go on to fight in a battle that would change their lives. Six of these men are based on actual cadets who fought at the battle. It is through these boys that we get to see the affects of war on the men who fought it, and how these young lads, men who had never before been in battle, showed true bravery in the face of an enemy. Making their story the main story, showing the hopes, dreams and beliefs of every single one, gives the story its soul, and creates a very powerful, dramatic, and tragic film.

From an historical standpoint, the film is definitely one of the more historically accurate films made on the war. Like the film Glory, the actual story of the VMI Cadets at New Market is dramatic in itself, and needs little embellishment. The attention to detail in terms of drill, uniforms and equipment is truly remarkable. The Battle of New Market is dramatically recreated, showing the horrors and tragedy of armed conflict without becoming too graphic, making it a film that children over the age of 10 could be shown.

Casting wise, the film does a great job. All of the young actors who portray the Cadets focused on in the film doe a great job in their roles, making us understand who they were, what they believed in. The believability of the actors in their roles makes us care for them, so when the battle comes, and they come under fire, we actually worry about their fate. Of the supporting roles, all are good. But the standout of the cast is Jason Isaacs (The Patriot, the Harry Potter series) as Confederate General John C. Breckenridge. His portrayal of the former Vice President of the United States is truly wonderful. Isaacs has done his homework, and his performance is truly the highlight of this film.

The script for the film, written by David Kennedy, Thomas Farrell and Ron Bass, does a terrific job of presenting this wonderful story in a 96-minute film. Surprisingly, despite covering the story of the Cadets, as well as the overall story of the battle itself from the points of view of Breckenridge, Union Captain Henry S. DuPont (A surprisingly convincing David Arquette), and others who play a part in the making of this battle, is told in a way that anyone who sees it will not need to know the history of the war to understand what is going on. The rest of the crew, and the amazing cast, do a great job of conveying the story.

In closing, Field of Lost Shoes is the finest film ever made on the events of the American Civil War, and the young boys from the Virginia Military Institute who fought at the Battle of New Market on May 15th, 1864. It connects us on a personal level with the characters, making the events more relatable, and more tragic. It presents the story in a way where all those who view it will understand the political, social and military aspects of the story without it becoming confusing, or impersonal. Anyone interested in American history, or in exciting, dramatic stories, will find much to love in Field of Lost Shoes.